An American Feminist in Italy

Adventures of Gender, Class, and Intersectionality

Reflections, on this next-to-last day of my month in Italy 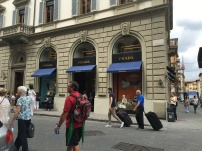 One of the things my well-traveled manpanion told me last year before I went to Austria and Germany was to interact with locals. Last year, our
Salzburg Global Seminar schedule allowed for only minimal interaction with the residents of Salzburg and Munich, but this year has been totally different. In Florence, I have talked to locals every day and have even cultivated friendly recognition with quite a few store clerks, servers, shop owners, artisans, and my AirBnB host. In my studio, I constantly overhear the conversations of Italians interacting with each other, not concerned about the American tucked away nearby.

Since coming to Florence in late May, I’ve had an immersive experience in the Florentine culture, and I couldn’t have imagined I’d have such an enriching month. I’ve learned some basics of the Italian language, and on many occasions I’ve spoken to servers and cashiers exclusively in their language. I figure I’m probably telling them that the moon is purple, but at least they know I’m attempting their culture instead of expecting them to cater to me.

Pronunciation of Names. I’ve grown pleasantly accustomed to being called “Leeza,” and it’s been a running joke that Tajah (which rhymes with “Asia”) has been referred to as “Ta-Ha” more often than not. Sam has become “Sam-Well.” Being called by a middle name is apparently a habit of only royalty, which means Sierra and Halsey have typically been called “Kat-Reen” and “Clah-Eh,” since their first names are Kathryn and Claye. 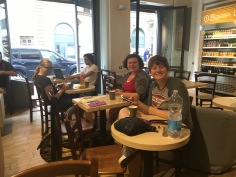 The thinking noises. In Italy, the word allora is the substitute for any pause word—perhaps our equivalent of “umm” or “uh,” and it’s usually spoken with a beautiful lilt. Quindi is another thinking noise along the lines of “okay” or “so.” I also have to chuckle when I’ve heard someone say with an Italian accent, “E bla-bla-bla.” 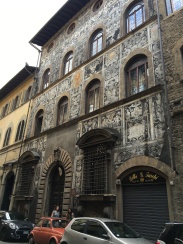 Italian Expressions. When a room has air conditioning, I particularly like that the Italians say it’s “fresh.” Our classroom at the AEF was often “too fresh,” which meant “just right” for me.  I’ll also miss calling sparkling water frizzante or acqua gassata. “Sparkling” just doesn’t convey the energy of it well enough for me anymore. I’ll also not soon forget a certain expression that “Better a death in the family than a Pisan at the door.”

Italian Gestures. Italians can carry on an entire conversation using only their hands. Pointing at the cheek close to the mouth area, I can tell a server that the food was tasty. I can also do a kind of sideways zipper motion to indicate that something was perfect. I can look toward a friend and touch my index fingers together, long ways, to suggest two people in view might be more than friends. I can place my open hand, palm downturned at my side waistline to tell someone I despise them (hopefully never to be used!). So many possibilities!

The Art. Florence is a culture that appreciates and values art, and it’s everywhere. From statues and monuments to graffiti and sidewalk painters, from full-length operas in a local cathedral to street performers filling the piazze with their mezzosoprano and soprano voices, the fine arts are a dominant thread in this town’s tapestry.

Architecture. When a building’s construction is dated anytime after 1800, it’s considered new, nothing to admire. Here, fourteenth- through eighteenth-century buildings are the norm, and all of them display the thoughtfulness of their architects who believed form and function needs to also be visually appealing.

PRIDE. While we were here, Florence held its first Pride Festival! Over 30,000 people attended, and several of my students attended, extolling the energy of the day. It was the same day as my ill-fated trip to Venice or else I would have been marching right alongside my students.

The Pace of the City

Pedestrian Culture. Everything in Florenc
e is never more than a thirty-minute walk away, and usually it’s under fifteen minutes. Everyone walks or bikes. It’s a way of life.

The Bells. There are centuries-old cathedrals in every little neighborhood, and they usually chime at morning mass times and again at noon and 6:00 p.m. They tend to regulate people’s daily patterns.

Notice I didn’t say “foodie culture.” Here, the emphasis is on the food, not the eater.

The Service. Since servers and clerks are paid a living wage, they don’t expect tips, and as such, they don’t refill the water after every three sips. They bring a bottle of water to the table, and diners drink as much as they want.

The Food. There are too many dishes to list here, but the bruschetta has been a flavor explosion (which the Italians pronounce “bru-sket-ta,” not “brushetta”). The pizza and pasta are not heavy like their stale American counterparts, and the ribollita is a thick, hearty vegetable soup with bread that I will definitely be replicating. I’ll also miss the exquisite wine; even the house wine in restaurants is amazing. There’s just no bad wine here, and since no one drinks to excess (except the American tourists), it’s a pleasant part of late lunch and dinner.

The Locavore Way of Life. Restaurants and markets sell fruits, vegetables, bread, and pasta grown or made in Tuscany. No artificial products. They don’t really offer junk food, and sodas aren’t the dominant drink (in fact, I’ve seen it in the hands of only Americans). I have been Diet Coke-free for over a month now, and it’s such a relief not to be dependent on the addictive and foul, cave-forming liquid for my afternoon pick-me-up.

AEF Faculty/Staff. ❤ These folks are amazing. They are accommodating and patient; they are always cheerful toward EKU. They care about our overall cultural experience, they are passionate about art, they love their culture, and they love visitors—a perfect combination. (I’ll be making a separate blog only about them.)

The AEF building. I’ll miss a classroom in an eighteenth-century building with marble walls, fresco ceilings, eight flights of stairs between floors, and gender-neutral restrooms that truly are no big deal.

If I return next summer (or anytime in the future, which I’m hoping to do!), I will attempt to change only a few things:

My Language. I want to speak and understand more Italian than I’ve managed to learn while here. The only stressful times I’ve had in Firenze involved not knowing enough Italian to please a local, and that’s a stressful experience. I have plans to invite my Italian Language classmates to my house to practice on a regular basis.

My Lodging. While I enjoy having a brisk ¾ mile walk between the school and my studio, I want to seek a place for next year that has a kitchenette so that I can prepare a lot of my own meals. Unless it’s cost-prohibitive, I might actually look for an air-conditioned place to live.

The Students’ Lodging. I will design a contract of sorts for the students’ apartment so that they agree in advance to wash and put away their own dishes, to clean the kitchen after every use, and to take out the trash when they can see trash over the top of the can. I’ll also make sure to bring a Sharpie to their place sooner than I did this year for the purpose of marking water bottles and similar-looking food.

The Students’ Travel. I will request the students gather and book their flights so that they arrive within the same two-hour time span. This year, it was quite hectic for the AEF hosts to keep sending the Mercedes van and driver to the airport and then shuttling us to our apartments over several hours or even days’ time.

My Course. I’ll change several things about my class (as I always do), but this aspect will take me until spring to start fleshing out. 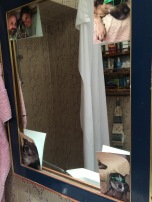 I’m looking forward to returning to my manpanion and our pack, and I am eager to see my parents, sister, nephew, and nieces. I know I’ll sorely miss this place I’ve called home for a month, but it’s now a part of me that I can’t lose. I’m returning to the States as a more global citizen, and I hope to weave the Italian way of life into my own daily life.